Smooth as velvet. That’s how in sync FTM trans man Stevie Trixx and Jonah Wheeler are with each other. They start with gentle passionate kissing; nothing too abrupt or rushed. Just two hot guys getting familiar with each other’s hot…

Full StoryJonah loves to feel the ginger FTM stud’s nipples between his hot fingers, each tweak bringing a sexy groan from Stevie’s mouth. They linger in this state of exploration. Stevie unzips Jonah’s pants and slides a hand inside. Jonah’s hard as a rock! Stevie strokes Jonah and the tall hairy stud responds to the delicate touch. Sensational but unhurried!

Jonah’s reaches between Stevie’s legs and gently fingers Stevie’s hot pussy. Stevie’s already dripping wet from the foreplay, which is exactly what Jonah was going for!

He moves Stevie around on the velvet and kneels down; the better to give Stevie’s manclit the blow job he’s been waiting for!

Jonah’s licks gently at first. Stevie’s moans egging him onward. Jonah takes it all in his mouth and Stevie’s squirming kicks into overdrive! Our hot ginger is loving the pussy-whipping he’s getting from Jonah’s tongue!

With Jonah good and hard, Stevie wants that dick balls-deep in his pussy. Jonah kneels up to get right at the bonus hole opening and rams his spit-lubed rod right into Stevie’s dripping hole. Both moan out loud, these feelings are intense!

Jonah’s cock glides along Stevie’s manclit, sending shivers through both men. Stevie switches them to cowboy position after a long first fuck. The pace starts to increase as Stevie now controls the pumping! Faster and faster!

Jonah lays Stevie down on his back and plunges back into Stevie’s inner walls. The speed picks up, Jonah’s getting close! Stevie’s begs for Jonah to breed him and our hot daddy is happy to please! 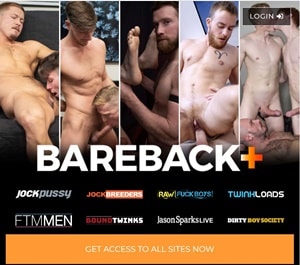